The Excursion Before the Expedition

Rainstorms welcomed the Advancing Life Foundation’s second group of expedition volunteers as they arrived in Ecuador to continue work on the vocational school. 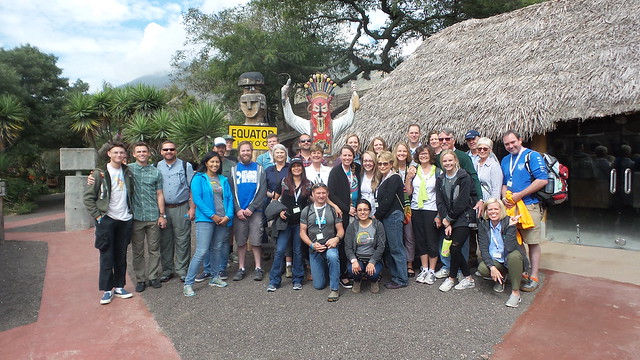 The group arrived on a Friday and spent Saturday exploring the town of Otavalo with a trip to the Center of the Earth Museum and a craft market.
The drizzle continued on Sunday as expeditioners drove through the cloud forest to Pucara to meet their host families. They were welcomed with a beautiful cultural celebration with dancing and a candid explanation of what the vocational school will mean to the community.

“Some of the families that live near the job site said they loved to look for the bus every morning to see us coming to work, to see those that are making their dreams of education come true,” said Advancing Life Foundation board chair KimMarie Larsen.

The villagers shared some good news during the welcome reception, too. “The Inta – Cara Center’s reach is being expanded to another area, which means it is now available for almost 30,000 people,” KimMarie said.
Tackling the Job

Hearing that their efforts were going to reach even more people than initially anticipated boosted our volunteers’ excitement and made the labor easier to prepare for, even if it might rain the whole time. To everyone’s surprise, Monday rolled in as the storm rolled out. Call it a coincidence or a blessing, but everyone was relieved to be avoiding a muddy workweek. Volunteers started digging trenches and moving bricks and rocks. After a hard day of hands-on work, our group welcomed the opportunity to take a break and visit the neighbors, who taught everyone how they grow and harvest coffee. It’s inspiring to see how hard the villagers work just to enjoy the same luxuries we so often take for granted.

ASEA Marketing Manager Hannah Mangum loved interacting with the locals. “We went to a home where the mother, who was my exact same age, took us around their property and walked us through a normal day of life for them,” she shared, “It was really eye-opening to see how they live; how it differs from my normal, day-to-day life.”
Foundations Poured and Moments Shared

On Tuesday, work on the perimeter of the school continued. Expeditioners mixed cement and built the foundation to the front and side fence. Just like the first expedition, the group had the opportunity to work with a group of high school kids from a neighboring community. These boys are tough and resilient, hoping to someday benefit from what the vocational school has to offer. The afternoon and evening on Tuesday were spent with villagers teaching women about women’s health, playing soccer with the men, and ASEA Associate Andreas Hammer teaching the children how to play tennis.

The best parts of the trip were unrelated to sightseeing. The best moments seemed to be the small, genuine ones. Not forced and unplanned. “The impromptu soccer game that we got together on one of the evenings was a much more meaningful experience than any of the sights we saw in Quito,” ASEA’s legal counsel Ben Tyler shared. “I’ll always have a special feeling for the rural people of Ecuador.”

The back-breaking physical labor continued Wednesday but was rewarded with a much-needed dip in the hot springs later that night—the first hot water the volunteers had access to since arriving in the village.

It was hard leaving the school on Thursday after all the progress the volunteers made. With some of the first bricks laid on the front fence on the property, their work on the school for this expedition concluded. Ben brought his son along for the expedition, who was especially sad to be finished working. “I was worried he would get bored or frustrated with the amount of work,” Ben said. “When we came back from the village after five days of working, my son turned to me and said that he was bored with sightseeing and wanted to go back to the village.”
Expressing a Sense of Accomplishment

With their hard work behind them for the week, it was time to celebrate! What better way to do so than celebrating the 116th anniversary of a community called Plaza Gutiérrez. The experience in this area was unlike any other.

Plaza Plaza Gutiérrez is home to many indigenous people of Ecuador. Volunteers sat down with the villagers to learn some of the skills that have helped keep their community thriving, like making thread from the Agave plant to crochet bags, place mats, hats, and carpets. Hannah described what it was like getting to know the people in Plaza Gutiérrez: “Life is simple. They don’t have much, but they are as happy as can be.”

And what better way to end the night than another evening of dancing! Maybe one of the best things about being immersed in a new culture is some of their quirky traditions, like when the villagers of Plaza started singing The Crazy Cow! Picture it: one person holds a makeshift frame above his head that is lit on fire, and as it burns they dance like a crazy cow to the song.

Sights and Sounds as Souvenirs

On the drive back to the hosts’ homes, the clouds stitched together like a blanket tucking in the sky. Flickers of light started illuminating the jungle. Lightening bugs were putting on a magical show as our volunteers reflected on their beautiful adventure. “You can travel, you can visit, you can even talk with people in a different culture or area of the world,” says Ben, “but until you have lived and worked and sacrificed alongside someone working toward a common goal, you haven’t really understood what it is like to really be a part of a community.”

Friday, our group of selfless volunteers prepared to say goodbye to the beautiful land and culture of Ecuador with some last-minute sightseeing. Even in the presence of some of the most incredible sights in the world, none of it compared to the actual service project itself.

Ben explained why he thinks this is: “Spending time working and sacrificing for a group of people has a way of linking you to them that transcends any other experience.”

Planning Your Convention Stay: Dining for All Budgets